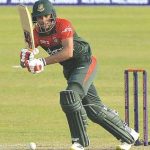 Bangladesh batsman Mahmudullah Riyad announced his retirement from Test cricket yesterday after a 12-year career.
The 35-year old played his last Test against Zimbabwe in Harare in July this year with Bangladesh recording a 220-run win.
The right-hander made an unbeaten 150 – his fifth Test hundred – in his final innings, and was named the player of the match.
He scored 2,914 runs at an average of 33.49 and took 43 wickets in Tests, captaining the side six times.
Local media reported that Mahmudullah told his teammates during the Zimbabwe Test but waited to make a formal announcement.
“Leaving a format of which I have been a part of for such a long time is not easy. I had always thought of going on a high and I believe this is the right time to end my Test career,” he said in a statement yesterday