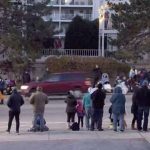 Americans were reeling Monday from an “unthinkable tragedy” after a driver slammed through barricades and into a Christmas parade in the Midwestern city of Waukesha, killing at least five and wounding more than 40.
The Sunday evening chaos which saw a red SUV speed into a crowd of men, women and children, raised immediate fears of a deliberate act — in a state where tensions have spiked following a high-profile acquittal in a racially-charged trial.
But CNN and NBC both cited law enforcement sources as saying there was no known connection to terrorism at this stage — nor to Friday’s verdict in the case of Kyle Rittenhouse, a teenager who fatally shot two people during Black Lives Matter protests in nearby Kenosha last year